...when two best friends, and horror movie fans, convince themselves that they would definitely be ‘the final girl’ at the end of the movie and never be the girl 'running up the stairs when she should be running out the front door'? You get Kim and Ket Stay Alive… Maybe. Each episode, Kim Burns and Ketryn Porter choose a different horror movie, and through very scientific (not scientific), totally indisputable (very disputable) methods, and amidst hilarious tangents about their personal lives, they determine whether they would be the ones to #StayAlive at the end. ​ 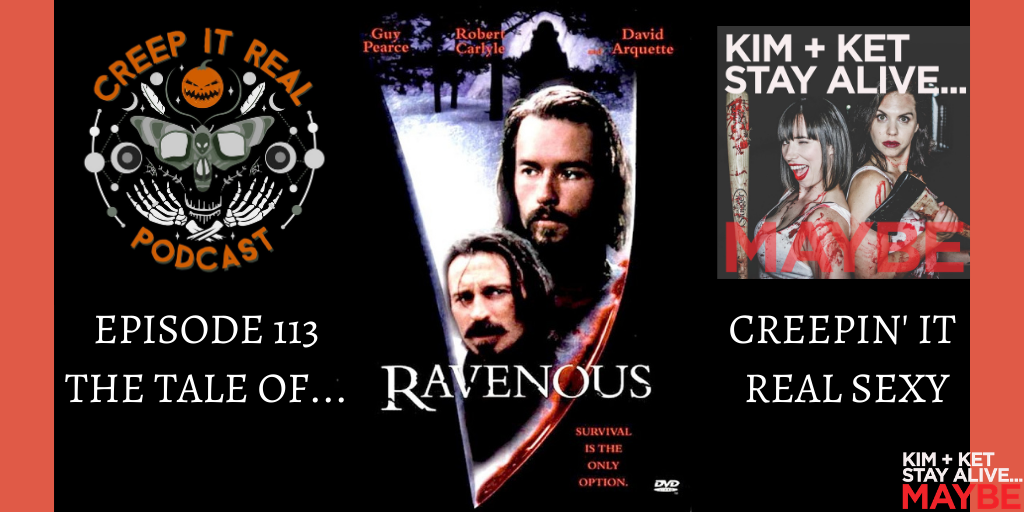 LISTEN TO EP. 113
Kim tells Ket about the sexual romp Ravenous starring Guy Pearce, Robert Carlyle and David Arquette. THEN our girls Bianca and Ashley over at the incredible podcast Creep it Real join the girls to discuss the movie AND the real life event that inspired the movie. Don’t forget to go and listen to their full episode on Alferd Packer. It’s significantly less sexy than what we got goin’ on with this movie but fascinating nonetheless! Most importantly, we’ll learn if Ket will live or die in Ravenous
Dir. Antonia Bird
Writer Ted Griffin 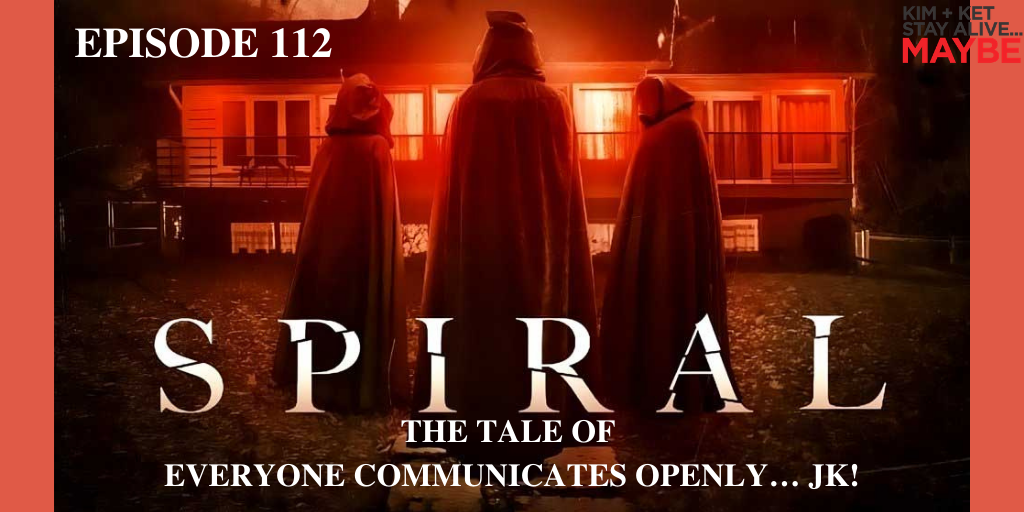 LISTEN TO EP. 112
Ket tells Kim about the Shudder Original Spiral starring Jeffrey Bowyer-Chapman, Ari Cohen and Jennifer Laporte. The girls argue over the use of the term diddy bag (YES - IT’S REAL!). They both realize their superpowers would only be useful in very specific and rare circumstances. Lastly, has anyone been able to find Jane Austen’s 80’s Aerobics VHS on Ebay? Most importantly, we’ll learn if Kim will live or die in Spiral.
Dir. Kurtis David Harder
Writers Colin Minihan, John Poliquin 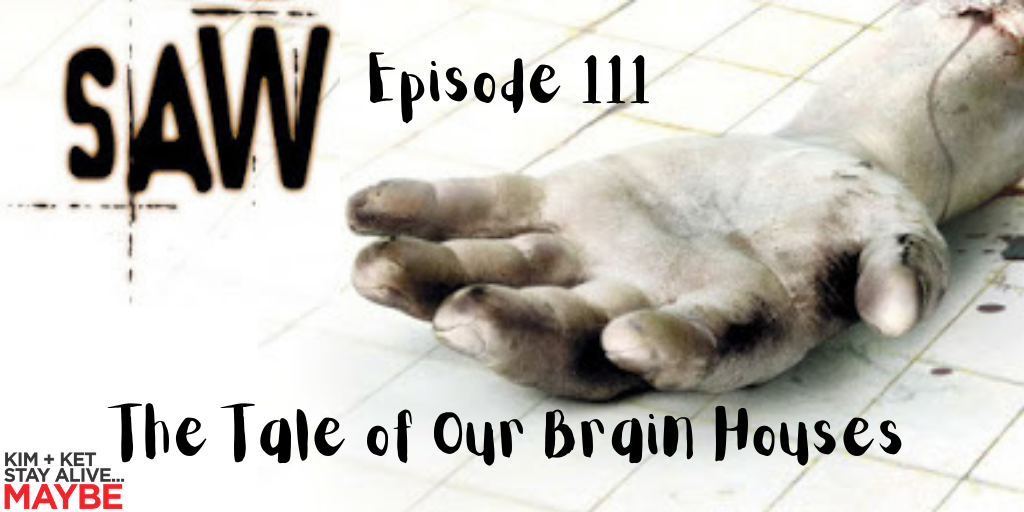 LISTEN TO EP. 111
Kim tells Ket about the OG Saw starring Cary Elwes, Leigh Whannell and everyone's favorite detective, Danny Glover. The girls announce that they'll be immortalized as Funko Pop dolls for one lucky patron. They also immediately solve who Jigsaw is: Prince Humperdink. So guard your brain houses because you're a jail person. Most importantly, we'll learn if Ket will live or die in Saw.
Dir. James Wan
​Writers Leigh Whannell, James Wan 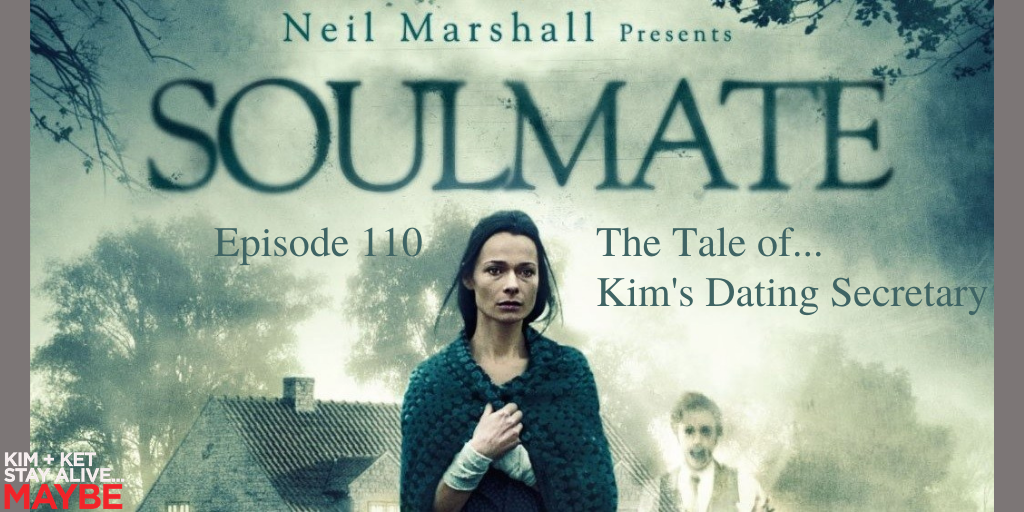 LISTEN TO EP. 110
Ket tells Kim about Soulmate in honor of Women Directors Month starring Anna Walton, Tom Wisdom and Tanya Myers. Ketryn applies for a new position that she created and hired herself for. Kim gets to really test out this ghost boyfriend thing but it’s really hard to see red flags when they’re ghost-lucent. And as usual, they offend every british person with their subpar british accents. Most importantly, we’ll learn if Kim will live or die in Soulmate.
Dir. Axelle Carolyn
Writer Axelle Carolyn 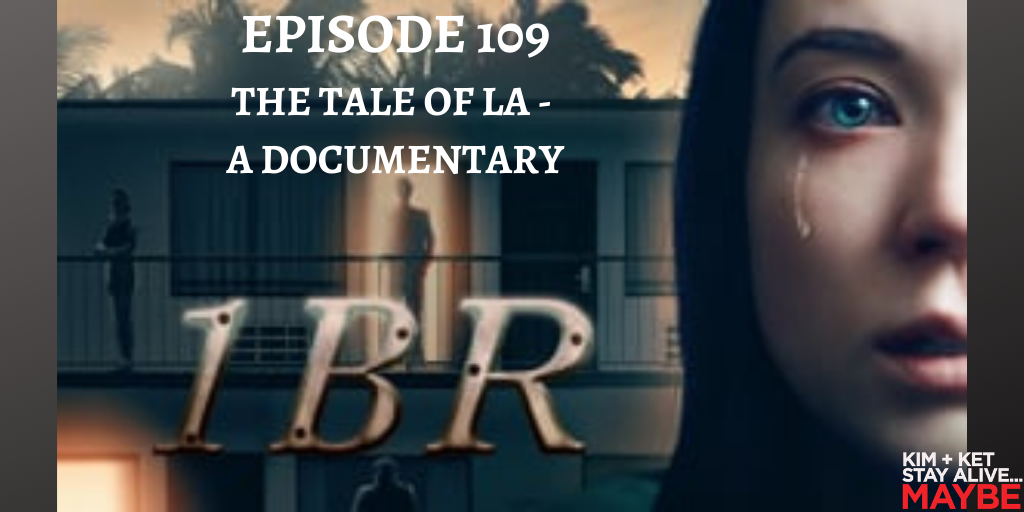 LISTEN TO EP. 109
Kim tells Ket about the Netflix original 1BR starring Nicole Brydon Bloom, Giles Matthey and Taylor Nichols. The girls will determine that there are two types of people in this world: nightgown people and bikini people. Which are you? They discover that Kim’s chainsaw sound skills transfer almost seamlessly to bagpipe sound skills. They’ll both “vag up” and determine that parking tickets and toxic dudes are a rite of passage when you move to LA. Most importantly, we’ll learn if Ket will live or die in 1BR.
Dir. David Marmor
Writer David Marmor 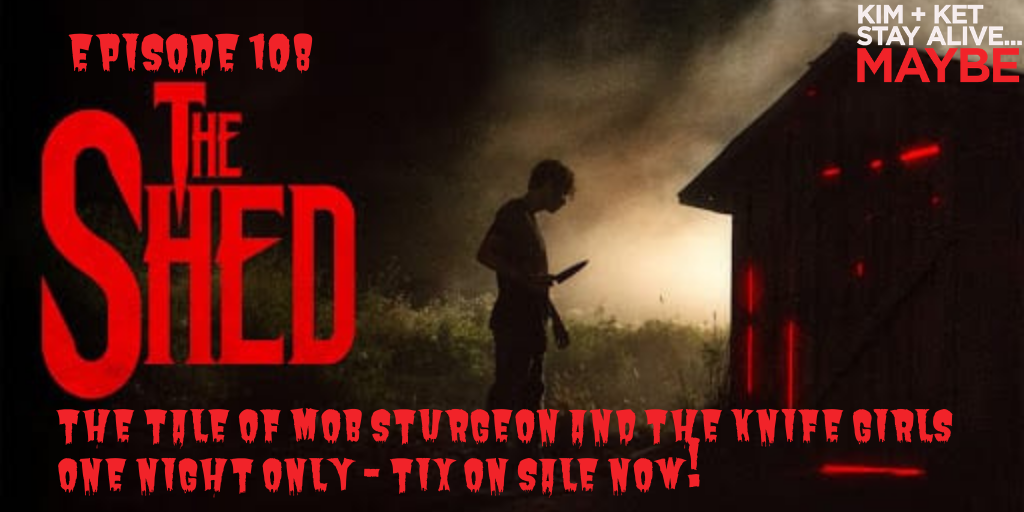 LISTEN TO EP. 108
Ket tells Kim about the shudder original The Shed, starring Jay Jay Warren, Cody Kostro, and Sofia Happonen. The girls are  joining and opening for several bands and shan’t let their complete lack of musical prowess to deter them. Ket will be forced to place Kim in a time out - no LOVE ISLAND! But then she’ll need to build a russian shed doll shed. Most importantly, we’ll learn if Kim will live or die in The Shed.
Dir. Frank Sabatella
Writers Jason Rice and Frank Sabatella

LISTEN TO EP. 107
Kim tells Ket about Daniel Isn't Real starring Miles Robbins and Patrick Schwarzenegger. So come join our very exclusive cult that no one is allowed to join. The entrance fee is making Ketryn cry with a chainsaw sound. Then you have to tell us our memes are funny and then if you pass, you'll be rewarded with a Cheesy Gordita Crunch. Most importantly, we'll learn if Ket will live or die in Daniel Isn't Real.
Dir. Adam Egypt Mortimer
​Writers Brian Deleeuw, Adam Egypt Mortimer 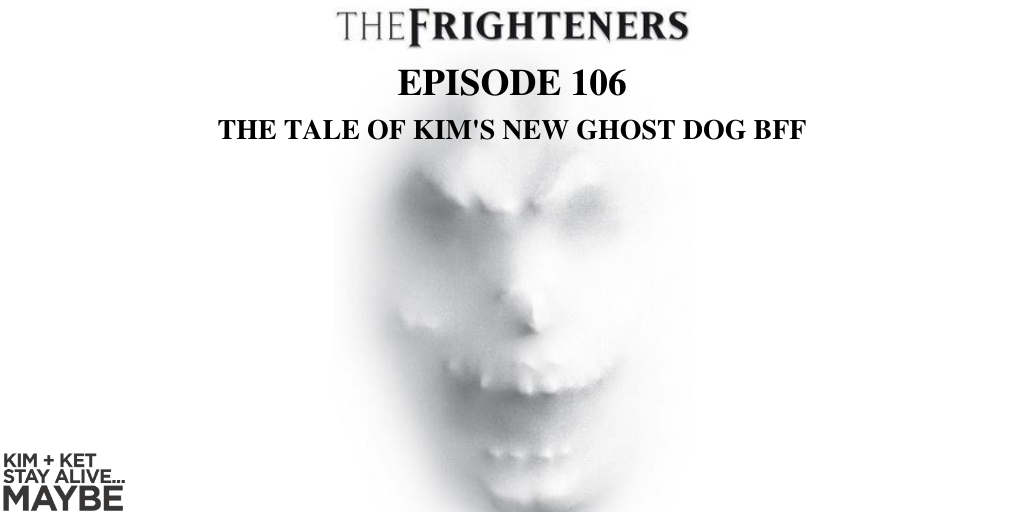 LISTEN TO EP. 106
Ketryn tells Kim about The Frighteners starring Michael J. Fox (national treasure), Trini Alvarado (not Andi McDowell), Dee Wallace (ET’s Mom), and Jake Busey (Gary Busey’s kid). Kim has adopted a new pet that won’t infringe upon her lease because it’s a ghost - a ghost dog. We discover one of Ketryn’s areas of expertise: fender benders. They also make an addition to their merch store: branded holy water guns! Get’em while they're hot! Seriously, should we sell those? The girls also REALLY need Milton to find his OWN story! Most importantly,  we’ll learn if Kim will live or die in The Firghteners.
Dir. Peter Jackson
Writer Fran Walsh, Peter Jackson 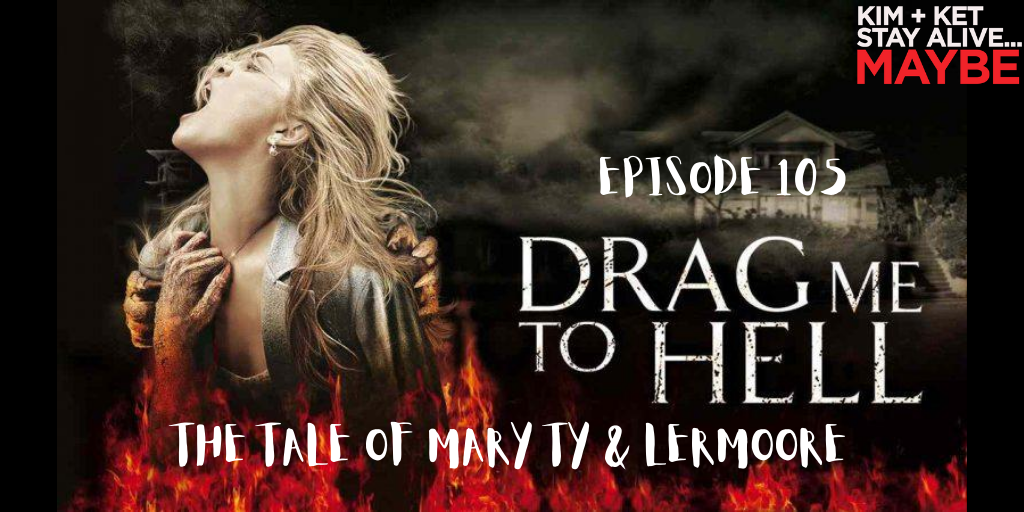 LISTEN TO EP. 105
Kim tells Ket about The Curious Case of Benjamin Button starring Brad Pitt! (Just kidding! What is our podcast?) It’s Sam Raimi’s Drag Me to Hell starring Alison Lohman and Justin Long. As always, if you add Kim and Ket together, you get one full person and that person’s name is Mary Tyler Moore. The girls also have some questions for Sam Raimi and his mouth horror. What’s goin’ on, bud? Most importantly, we’ll learn if Ket will live or die in Drag Me to Hell.
Dir. Sam Raimi
Writers Sam Raimi, Ivan Raimi 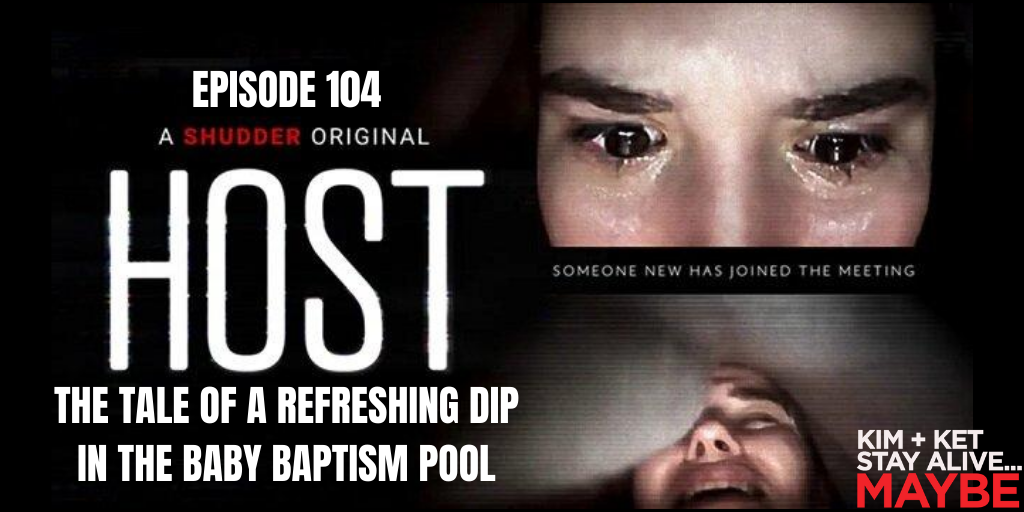 LISTEN TO EP. 104
Ket tells Kim about the film taking Shudder byt storm, Host, starring  Haley Bishop, Jemma Moore, Emma Louise Webb, Radina Drandova and Caroline Ward. Kim really changes her tune about a Cinq Seance by the end of this one. She can now be found floating in a baptism pool, filled with salt, for the rest of her existence. The girls get into a small tiff when Ketryn learns that Kim has no intention of tattooing her ashes in her when she’s gone. Most importantly, we’ll learn if Kim will live or die in Host.
Dir. Rob Savage
Writers Gemma Hurley, Rob Savage, Jed Shepherd
​
Theme song is "Intimidate" by Arik Martin
Theme song is "Exhilarate" Kevin MacLeod (incompetech.com)
Licensed under Creative Commons: By Attribution 3.0 License http://creativecommons.org/licenses/by/3.0/
More Episode Synopses